As part of the intense debate on the “divergence” of perception on the basic cultural values, Izvestia published April 21, 2016 the essay by Sergej Karaganov “New ideological struggle?”. Karaganov is a cofounder of the Valdai Club and Dean of the School of World Economics and International Relations (National Research University). His theses are complementary to the ones proposed by Foreign Minister Lavrov in his essay in “Russia in Global affairs” March 2016 (see http://www.frontiere.eu/russia-and-the-west-divergence-in-value-systems/). Karaganov examines the reasons for the different perception about “value systems” both in Russia and in the West. A difference which has particularly evolved since the outbreak of the Ukraine crisis. His thesis is that at the end of the Cold War there was the illusion, that the era of ideologies and ideological struggle was over and that the world was moving towards a “single system of values based on Western liberal democracy and capitalism.” (A typical example was Fukuyamas “End of History” thesis). Europe and America fascinated the world with their freedom and winning political system. Perception about the final victory of Western values was backed up by America’s massive military supremacy but most importantly by Western countries affluence, something that everyone desired to have, including Soviet and Russian people. The desire was sustained by a widely spread view that wealth and prosperity were a result of democracy. Western realities prevailed in international relations as well. But new realities came into being in the 2000s: “The West wanted to impose its political positions and values even with use of military force (in Afghanistan, Iran and Libya) and lost.” Its support for the Arab spring, further destabilized the Middle East and made democracy less attractive. During the 2008/ 2009 crisis the “Washington consensus” broke. As result, Europe and the US began to drift away from the values they had always offered to the world, at least the Christian world, and started imposing values that were unacceptable for the majority of countries: multiculturalism, excessive tolerance, and unusual sexual and family relations. Karaganov notes that “the overall impression is that elites in the old West are losing their unconditional dominance in the economy, politics, military power and ideology and turning into an increasingly weak minority.”

Among the main reasons why today there is such a divergence in the Russian and Western value system, Karaganov pointedly states that:

1. The West saw itself as victor and started to pursue what could be called a “Weimar policy in velvet gloves” pushing Russia off the political, security and economic stage. “NATO’s expansion was symbol of that policy. But EU enlargement also didn’t benefit Russia as it was not accompanied as it had been promised and expected by efforts to create a common and equal human and economic space from Lisbon to Vladivostock.” As a result, Western geopolitical expansion “weakened pro-European feelings in the political class in Russia”, and the logic that eventually prevailed was that the West was using “Russia’s weakness to take away its centuries-old gains and make it even weaker.” Followed by a defense–reflex on the Russian side. [caption id="attachment_6844" align="alignnone" width="503"] 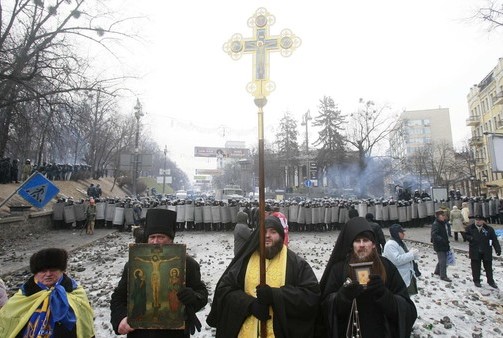 War in Ukraine (asianews)[/caption] 2. Russians were eager to join the Europe of nation states, Christianity and traditional values, from which they had been separated for seventy years: the Europe of Churchill and De Gaulle, Adenauer. Russian people were arduously regaining religious values and faith that had been eradicated for decades. But Europe had changed. Most importantly, since the 1980s and 1990s it had taken one more “giant leap from old to new values and imposed them stubbornly.” As a result, there was divergence between European and Russian societies and elites in their cultural development. “Russia puts emphasis on such notions as national dignity and courage. To many Europeans, these values seem obsolete, as they are perceived as part of their dangerous past – from the wars they unleashed and lost. But Russia won them at an enormous cost and is ready to protect its sovereignty and values by force”. 3. The third message, from a Russian point of view, is readiness to follow traditional foreign policy principle, including protection of national interests by force, especially if this is morally justified. The ideological clash may even become fiercer, according to the Russian security expert. He states that the Russian model is attractive also for many countries in the West and “the intensity of this confrontation is implicitly but strongly amplified by the mounting feeling that the current model of development based on growing consumption, inequality and declining morals is pernicious for the planet. There is a moral vacuum and it is expanding.” Karaganov’s essay expresses a “reaction formation”, as result of the “stalemate” which following the Ukraine and Syria crisis, has developed in relations between Russia and the West over the last years. The disappointment which he as well as Russian foreign Minister Lavrov express from their different point of view concerning the lack of qualitative response from the West to various Russian offers, may explain the sometimes quite propagandistic sounding language in Karaganov’s essay. This should however not be taken as an excuse not to read and carefullyconsider his argument.