By Elisabeth Hellenbroich In the aftermath of the Hamburg G-20 summit, several articles have been published in the international press which were focussing on Trump’s frequent verbal faux pas as well as his body language in dealing with different heads of state. An example was his remark about the “great physical shape” which French President Macron’s wife is in (July 3rd), as well as his “powerful” handshake with the French President that made the French president stumble towards Trump. In different talk shows like in the German TV WDR program “Hard but fair” (3rd July) which was featuring Peter Altmaier, the Chief of Staff of the German Chancellery and Federal Minister for Special Affairs in discussion with different U.S. observers, a leading German strategist expressed his concern about the totally “unpredictable nature” of Trump, pointing to the danger that the US president is playing with fire by inflaming crisis which may lead to war (North -Korea). In a recent ”Wall Street article”(July 16th 2017) the chairman of the Munich Security Conference Dr. Wolfgang Ischinger warned that the pending bill in the House which calls for new sanctions against Russia, is damaging by driving a wedge between the US and Europe. The US sanctions policy was qualified as being “detrimental” to the EU Energy Security and would have in particular a negative effect on “North Stream-2 project” (Construction of a second segment of the Russian gas pipeline to Europe) in which many Russian and European business firms are involved, as well as affect negatively gas deliveries from Azerbaijan to Europe and Oil exports from Kazakhstan to Europe. What Trump learned from Roy Cohn On this background, if we want to study Trumps character more closely, in order to find out why he often “mis”- behaves the way he does, it is worth reading an article published in the upcoming August edition of the US Magazine Vanity Fair. Although the article which was written by Marie Brenner under the headline “How Donald Trump and Roy Cohn’ ruthless symbiosis changed America” is reflecting a certain democratic partisan view point, it is revealing some of the characteristics of the President, while describing the strange symbiosis that once existed between the infamous New York lawyer Roy Cohn and his much younger disciple Donald Trump [caption id="attachment_8828" align="aligncenter" width="650"] 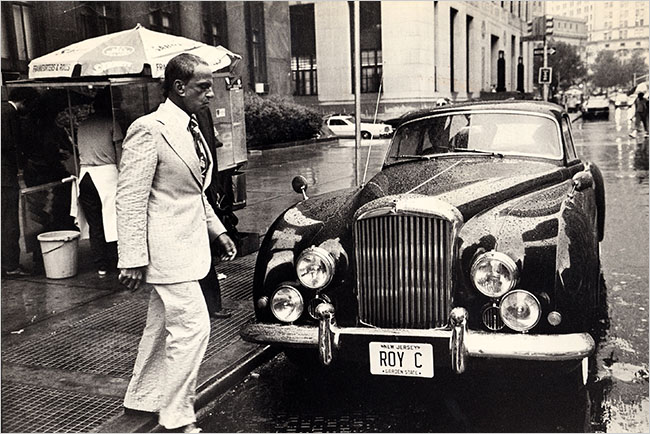 Roy Cohn, worked as a lawyer in New York for various mafia related figures before dying of AIDS in 1986.[/caption] What Vanity Fair documents (the report consists of several articles written by various authors as well as witness reports) is that Trump learnt a lot from Roy Cohn in the way the latter one handled his political opponents. As “Vanity Fair” documents, Roy Cohn became known as the notorious communist witch-hunter and mobster lawyer in the Fifties, Sixties and the Seventies. He was born in 1927 in New York City and died in August 1986 from AIDS, and at the beginning of the 1950ies he was instrumental for U.S. Senator J. McCarthy in the communist “witch hunt”.( Most spectacular was the espionage case against the Rosenberg, who were suspected as Soviet spies and condemned to death). According to Brenner Cohn, who served as Chief Counsel to McCarthy in the “Permanent Subcommittee on Investigations”, Roy was best known as a ruthless prosecutor. “During the Red Scare of the 1950ies”, he and Wisconsin Senator Joe McCarthy, the fabulist and virulent nationalist crusader, had hauled dozens of alleged “Communist sympathizers” before a Senate panel. Earlier the “House-Un American Activities Committee” had “skewered artists and entertainers on similar charges, resulting in a trail of fear, prison sentences, and ruined careers for hundreds, many of whom had found common cause in fighting fascism.” As the author underlines “Cohn’s power derived largely from his ability to scare potential adversaries with hollow threats and spurious lawsuits.” [caption id="attachment_8829" align="aligncenter" width="675"] 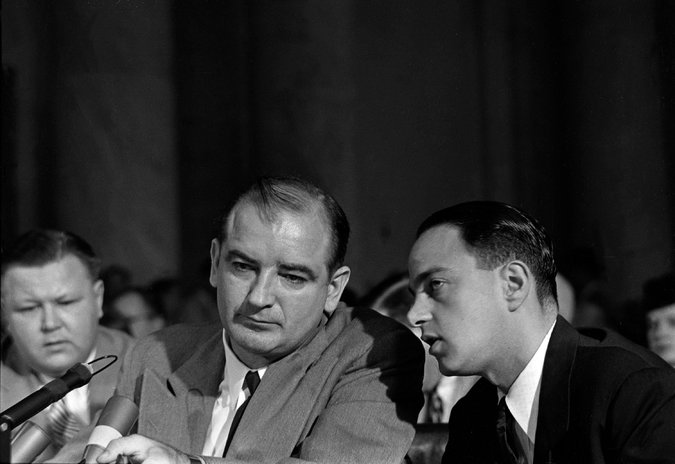 Joe McCarthy and Roy Cohn, at the time of the anti Communist witch hunt[/caption] Under U.S. President Dwight Eisenhower, who got angered by McCarthy’s attacks, documents were released to key legislators and the press, resulting in the famous Army McCarthy hearings that were watched by 20 Million Americans over 36 days. Within weeks Cohn was banished and U.S. Senator McCarthy was soon censured and forced to resign in 1954. Yet “Cohn would make defeat into victory and another tactic was to befriend the town top gossip columnist.” Cohn’s carrier as Lawyer After that, Cohn began a 30 year long career as a lawyer in New York City. Among his clients there were the Trumps (Donald Trump’s father Fred Trump and later his son Donald were both real estate developers), several prominent Mafia figures like the Genovese and Gambino mafia families, Anthony Salerno, Carmine Galante and John Gotti, the owner of Studio 54 Steve Rubell. Cohn’s relation with his protégée Donald Trump jr. began in 1973 when, as Marie Brenner reports, the young “would be developer from Queens met one of New York’s premier power brokers: Roy Cohn whose name is still synonymous with the rise of McCarthyism and its dark political arts. With the ruthless attorney as a guide, Trump propelled himself into the city’s power circles and learned many of the tactics that would inexplicably lead him to the White house years later.” In the 80ies he had opened the Grand Hyatt Hotel and as Donald Trump’s Hyatt rose, according to Brenner, the hidden hand of his attorney Roy Cohn was always “there to help with the shady tax abatements, the zoning variances, the sweetheart deals and the threat to those who might stand in the project’s way.” It is reported that at 39 Trump, according to a Department of Justice lawsuit, used widespread practices in order to avoid renting to blacks, including implementing a secret code: “When a prospective black renter would apply for an apartment, the paperwork would allegedly be marked with a C- indicating coloured (a charge that, if true, would constitute a violation of the Fair Housing Act). Nevertheless the Trumps countersued the government.” According to Brenner “Cohn with his bravado, reckless opportunism, legal pyrotechnics, and serial fabrication, became a fitting mentor for the young real-estate scion (Trump). And as Trumps first major project, the Grand Hyatt, was set to open, he was already involved in multiple controversies. He was warring with the city about tax abatements and other concessions. He had hoodwinked his very own partner, Hyatt chief Jay Pritzker, by changing a term in a deal when Pritzker was unreachable – on a trip to Nepal. In 1980, while erecting what would become Trump Tower, he antagonized a range of art patrons and city officials when he demolished the Art Deco Friezes decorating the 1929 building.” Trump at that time offered a response that was pure Roy Cohn style: “Who cares?” he said “Let’ say that I had given that junk to the Met. They would have just put them in their basement.” Brenner refers to the author Sam Roberts, who told her that Cohn worked with a three-dimensional strategy, which was: “1. Never settle, never surrender. Counterattack, counter sue immediately. 3. No matter what happens, no matter how deeply into the muck you get, claim victory and never admit defeat.” In 1986 Cohn was kicked out of the New York Bar association for “dishonesty, fraud, deceit and misrepresentation,” i.e. Cohn’s nefarious practices had finally caught up with him. In 1986, while prosecuted by the IRS he died of AIDS. By that time Trump had already grown up as real estate speculator on his own. [caption id="attachment_8830" align="aligncenter" width="1484"] 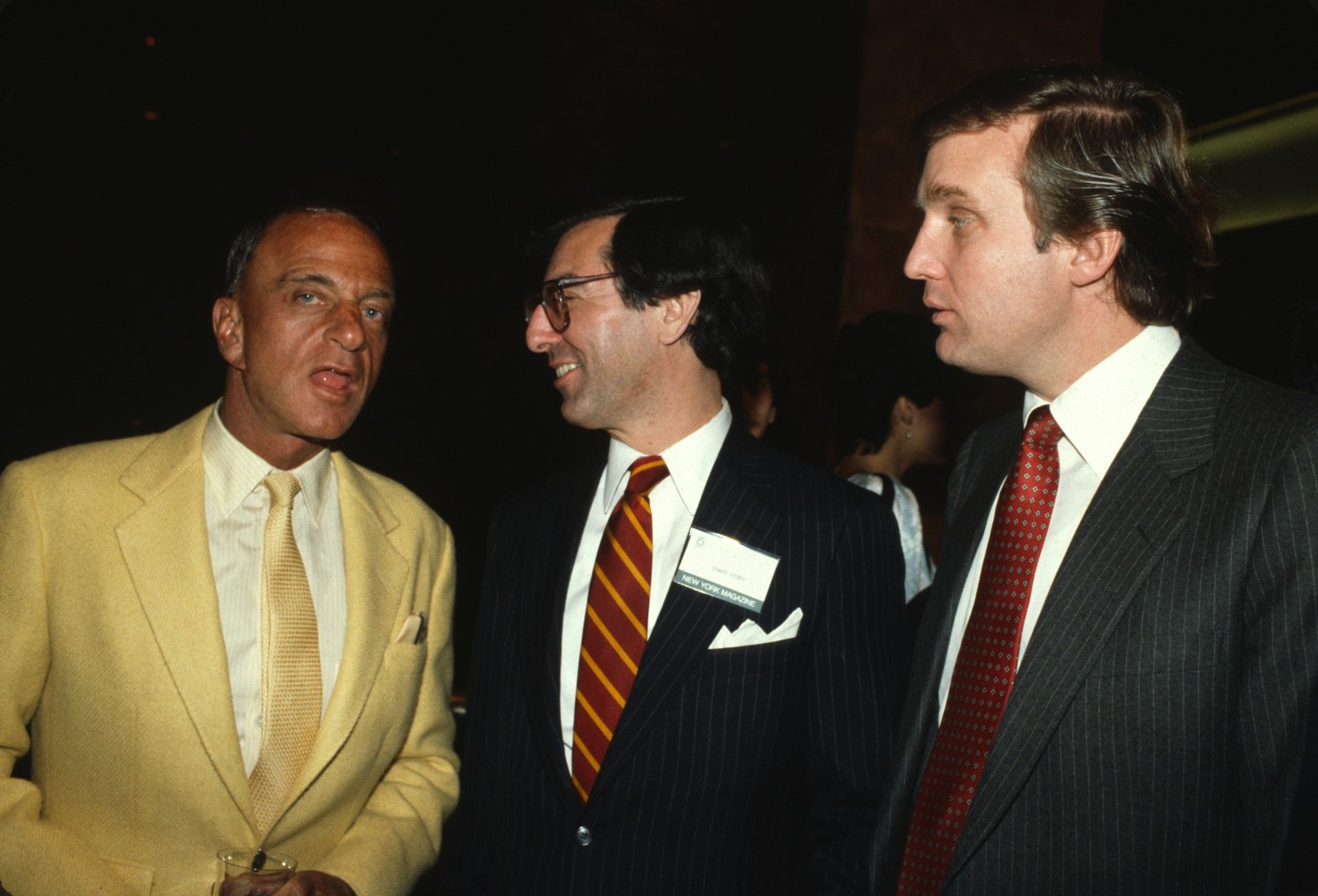 Roy Cohn, left, publisher Ed Kosner, center, and Donald Trump in an undated photo (presumably dating to the early eighties – Sonia Moskowitz/Getty Images)[/caption] The article concludes reporting about Roger Stone, a close friend of both Cohn and Trump, who had reported that on the day after Donald J. Trump was elected President, he was one of the callers who got through to his old friend at Trump Tower: “Mr. President” said Stone “Oh please, call me Donald.” Stone remembered Trump saying few moments later, sounding wistful: “Wouldn’t Roy love to see this moment? Boy do we miss him.’” How some of Cohn’s technique got translated Some of Cohn’s philosophy and the effect it had on Trump is revealed in his book “Art of the Deal.” As a US observer noted, Trump keeps the ball rolling with his endless tweets, attacking, changing topics, lying, litigating, lashing out at perceived enemies, and keeping his allies, his enemies, the government, the Senate, the House, Wall Street et.al. off balance and perplexed. He is the untrained boxer who runs into the ring, swinging wildly, surprising his opponent, and miraculously scores a knockout. Such was his victory in the Republican primaries and his race against Hillary. The press and his opponents only played into his bizarre antics, never recognizing the true anti-establishment mood in the electorate and they still are in major denial about that sentiment.