<![CDATA[<i>By Elisabeth Hellenbroich At the recent XIV annual conference of the Valdai Discussion Club (Oct 16-19th 2017), Professor Dr. Vitaly Naumkin was chosen as the first laureate of the Valdai Academy award for his successful work to bring about truce in Syria. Politically this is a significant signal since it coincides with some recent developments which may open the possibility for some future stabilization in the region as a whole. Professor Vitaly Naumkin, is history professor and at present Director of the Oriental Studies at the Russian Academy of Sciences. He is also president of the Center for Strategic and Political Research and editor in chief of the Magazine “Vostok ORIENS”, published by the Russian Academy of Sciences. [caption id="attachment_9456" align="alignnone" width="300"] 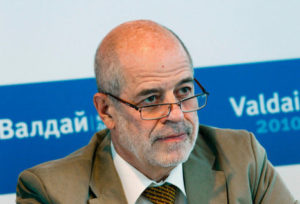