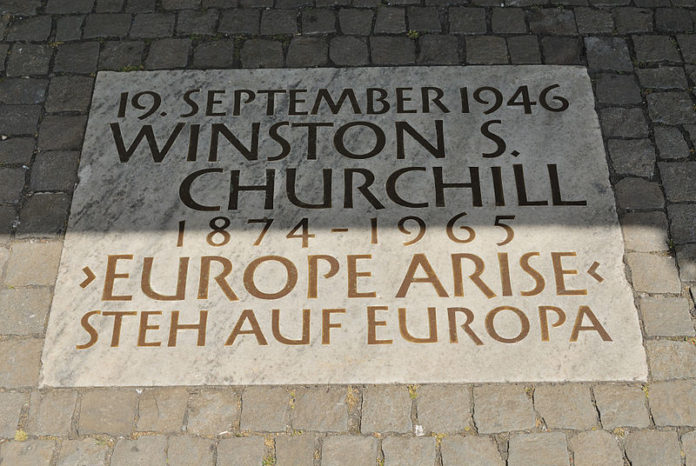 The “storming” of the US Capitol which took place January 6th is an “ominous sign” on the wall. Inflamed and encouraged by President Donald Trump who had told thousands of supporters “to protest against the illegal election results”, the street “mob” started to move towards the building, where Senate and House met to discuss the certification of the electoral college that Joe Biden is the elected President. Unseen so far in recent American history, which was aired live throughout the world, thousands of protesters – among them the armed militias from “Proud boys” – were breaking through the protection zone of the US Capitol. The images of vandalizing Trump followers show that it’s not only President Trump who tramples on the principle of the “Rule of Law” and Constitution, but that the country – once called  a “beacon of hope” and  model for democracy – is deeply split. With the beginning of the new year 2021 and the inauguration of the new President Joe Biden one can only hope that renewed efforts are being made by heads of state around the world to lay the ground for a  new era of cooperation , “peace and stability” and a common effort to fight against the species threatening Pandemic Covid -19.
Never again war!
In a recent article published Dec 14th in a Bavarian newspaper, the former chairman of the influential “Munich Security Conference” Dr. H. Teltschik called for extraordinary efforts on the side of states in the EU, US and Russia, in order to prevent what he at one point called “a new kind of new apocalyptic hell”. Given the multiple newly emerging challenge, which includes the global pandemic, mass migration, environmental destruction, a renewed conventional and nuclear new arms race, as well as attempts to undermine multilateral organizations such as WHO, UN world Food program etc., he demanded that in 2021 major efforts should be done to preserve peace and security in the world.  He stated that Germany has lived through a long period of peace and that 75 years ago World War II ended leaving 50 million dead, millions of war prisoners and refugees, as well as leaving destroyed cities and annihilated villages. This was followed in August 1945 by the throwing of the first atomic bombs (by US Air Force E.H.) over the Japanese cities Hiroshima and Nagasaki- killing on the spot hundreds of thousands of inhabitants  while 130.000 died in the following years and are up to this day suffering from the after effects. “Which type of inferno do we want to live through to finally understand, that the answer can only be ‘Never again war! Never again dictatorship’, Teltschik adamantly asked.  He underlined that Germany which was responsible for two world wars has all reason to be in the vanguard of states that wish to establish a secure peace in Europe and world- wide.  Being “one of the most stable democracies and economically most successful economy in the world” Germany could however not take that success for granted.  It requires each citizen to commit himself, overcome its own self- interest and engage for the Common Good of all human beings.
According to the author, one of the most important pillars upon which peace and security was built in Europe after the Second World War, was the German- French reconciliation and cooperation which was established in the post war period. It was the British statesman, Sir Winston Churchill, who in Zürich 19th September 1946 developed a “vision” concerning a future Europe. Being confronted with millions of trembling people, that were hungry, desperate, worn down – who after their return from the war were staring at the ruins of their cities and houses, there could be only one vision which would have a future in Europe: “The vision of creating a new European family of peoples.” As Churchill stated at the time: “We must create a kind of United States of Europe.” The way to do this is was by way of reconciliation and close cooperation between France and Germany. From Konrad Adenauer / de Gaulle this has remained, according to the author one of the most important principles in Germany’s foreign policy up to this day. It was Merkel, Macron and Putin who signed the Minsk agreement, to pacify Ukraine; it was Merkel and Macron who suggested a “European reconstruction Fund” at the recent European Heads of State summit to pave a way out of the economic crisis caused by the Pandemic. A second pillar remains the friendship with the US and cooperation within the Atlantic Alliance.
Cooperation with Russia-   a precondition for a secure peace
Teltschik however also made clear that- by looking at Russia, which at present sees NATO as a threat while at the same time it is beginning to rearm on a conventional and nuclear level, – a precondition for peace and security in Europe and the world is “cooperation with Russia.”  He referred to the famous Paris- Charta, by recalling that November 1990 all 27 governments and heads of state of the CSCE member states, signed in Paris the “Charta for a new Europe.” “Its aim was a common Europe from Vancouver to Vladivostok, giving all member states equal rights and duties and equal security: It was a fantastic vision and the Paris Charta outlined the principles of cooperation and the instruments to implement those principles.” But “we only used it inadequately,” Teltschik wrote and warned that “today we are facing an almost ‘apocalyptic world’. How do we want to preserve peace? Our answer can only be an all- European perspective which includes Russia.”

The danger of a standstill in German- Russian relations

Much more pessimistic in tone was a column written on Christmas Eve (24th December 2020) by Alexander Rahr, an influential Kremlin expert in Germany, who was the only one to physically attend the recent Valdai Forum (end of October). In an article written for “Russland kontrovers” entitled “2020 – Russia and Germany on the wrong track”, he wrote a quite dark assessment concerning future German- Russian relations. The Year 2020 was, as he put it, “a black year” in the history of Russian- German relations. He particularly pointed to the Navalny case, which “could poison the relations for years to come.” In an atmosphere shaped by mutual accusations and loss of confidence neither the economic relations nor the relations between the civic societies can improve Russia and Germany, which has been hampered anyway by heavy travel restrictions and lockdown. According to Rahr both Germany and Russia are caught in two “completely different narratives.” Germany accuses the Kremlin to have poisoned Navalny by using a forbidden chemical weapon. Putin rejects all this and in Germany he is qualified by some as liar and assassin.  The research conducted by the investigative platform Bellingcat (British) and by the “Navalny Anti-corruption Fund” are according to Rahr, taken as irrefutable “proof that the Kremlin was behind the assassination attempt against Navalny” while the Russian Secret Service is portrayed as “dumb”. By referring to German Defense Minister Annegret Kramp- Karrenbauer, who had said in response to the Navalny case that one “should negotiate from a position of strength” with Russia, and with the upcoming election of a new CDU chairman, followed by new general elections which may end with a Black- Green Government, the course, as Rahr puts it, is set for a “storm” in respect to Russia.