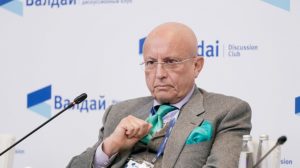 Nuclear weapons have many declared and undeclared functions apart from the most obvious one―preventing an attack on one’s own country or allies by the threat of retaliation. This also means preventing a massive attack by conventional forces (the Russian Military Doctrine allows a nuclear response to non-nuclear aggression if it threatens the very existence of the country). If nuclear weapons are used, they will cause a global catastrophe, and yet they deter major conflicts that can escalate into a nuclear war.

Nuclear weapons and the opponent’s belief that the other side can use them or conventional weapons under their cover serve as an implicit guarantee for all friendly states, and not only formal allies. For example, NATO’s 78-day bombing campaign against Yugoslavia in 1999 would be completely impossible today. But back then, semi-decayed and weak Russia was not considered a state capable of using force. And NATO, hitherto a defensive alliance of democratic states, committed open aggression.

Efficient nuclear weapons and the belief of rest of the world’s that their owner can use them are one of the main attributes of a great power which others have to listen to.

Nuclear weapons are one of the key factors helping to curb a conventional arms race and attempts to convert economic dominance into politically significant military superiority. A country’s supremacy in non-nuclear weapons may be infinite, but threatening to use them or using them would be senseless if the losing party can respond with a nuclear strike; or if a conflict may escalate to a new level. The U.S. invested trillions of dollars in non-nuclear rearmament in the 1990s-2000s, but the achieved level of supremacy could not be converted into political and economic one. Power expansion proved counterproductive as it not only brought terrible suffering to the countries attacked but also seriously undermined the United States’ political, economic and moral positions in the world.

When I studied the history of nuclear confrontation, I understood that nuclear deterrence was the most important means of “civilizing” elites of the countries that had such capabilities. The possibility of using nuclear weapons helped cleanse the U.S. and Soviet leadership of radically-minded people and forced those remaining to be more careful.

Finally, the emergence of nuclear weapons was a key factor in the redistribution of power in the world. For five hundred years since the 16th century, Europe’s better cannons and warships served as the foundation for its political, economic, and cultural dominance, for its ability to plunder colonies and semi-colonies, and redistribute the gross world product in its favor. The situation changed when the Soviet Union came into existence and China created its own nuclear weapons. Half of the world stopped being subordinate. Then the West seemed to have regained supremacy for a historical second in 1991-2007, but as Russia grew stronger, the U.S. suffered a series of military-political failures, and the Western economic model revealed weaknesses in 2008, global power redistribution resumed, putting the West at an even greater disadvantage. I have already written before that this is the main and hardly eradicable reason for the outburst of hostility towards Russia. It will take a long time for the West to adapt to the new situation where it no longer dominates militarily or politically, nor ideologically or economically.

I could examine more thoroughly, as I did in my academic works, positive aspects of nuclear deterrence. But let me instead point out one more aspect which has not been analyzed or even mentioned before but which seems to have developed in front of our eyes. Deployment of nuclear weapons and other strategic systems used to whip up the arms race, as the emergence of new weapons provoked identical steps from the opponent, especially in the Soviet Union which was catching up but sometimes went head, facing a response.

The Russian president’s address to the Federal Assembly on March 1, in which he said that Russia was ready to deploy or had already started to deploy a number of new high-tech strategic and quasi-strategic systems, may portend one more function of nuclear weapons, that is, preemptive deterrence of the strategic arms race. The announced systems—heavy missiles capable of attacking the U.S. from any direction, nuclear-powered cruise missiles and torpedoes with an unlimited range, hypersonic missiles, and maneuvering warheads—make the Americans’ quest for supremacy and invincibility completely senseless. Although everyone in the U.S. seems to be agreeing that it would be desirable to regain them, attempts to convert economic and technological achievements into military superiority through simultaneous deployment of a new generation of offensive nuclear weapons, high-precision and long-range non-nuclear systems, and gradual deployment of a multi-layered missile defense become useless. The pursuit of military superiority essentially means wasting money and strength. The main argument that these systems can make America securer, bring it political and economic advantages, and make it again the hegemon it presumably was in 1991-2007 is gone.

Russia may not necessary have to deploy all of the announced systems. They are not cheap, even though they may render senseless the other side’s expenses which are several times or maybe even dozens of times bigger. Moreover, it would be better not to deploy some of them at all if they can block in advance some of the aspects of arms race and encourage agreements to curb it. But of course their designers, who legitimately take pride in their systems and deserve all the praise, will seek to get them deployed, for the logic of military-political complexes works not only in the United States. It would be better still to work towards new generations of weapons.

The announced systems also devalue colossal investments in military projects which Russia cannot and should not afford. Judging from descriptions, some of these systems, even their non-nuclear versions, can make aircraft carriers and other warships, which can threaten Russia and its allies and friends, extremely vulnerable if not completely defenseless.

Naturally, there will be no immediate effect. The fury with regard to Russia and the desire to get a piece of the military pie will not go way overnight. But the measures announced by Vladimir Putin will prod American and other foreign elites into thinking realistically and getting ready to negotiate.

But even when, and if, they become ready, it is not clear how to act upon their readiness. It would be technically difficult to come to agreement as many new actors have come into play. New generations of strategic and non-strategic systems are being deployed, with differences between them fading. Cyberweapons that can inflict strategic damage may already be available or will become available soon. Numerical parity was a rather artificial parameter in limiting the arms race even in the past, and the pursuit of such parity often spurred the arms race rather than curbed it. Now it has become completely irrelevant. The U.S.’s unilateral withdrawal from the ABM Treaty and the rampant political hysteria in America undermine any trust in its competence and ability to negotiate and honor agreements. And yet it is necessary to make a try. This would be better than waiting until the mounting mistrust, albeit contemptuous on our side, the emergence of new weapons and their acquisition by new actors, and the absence of dialogue lead to a war that in all probability may put an end to mankind as we know it.

And one more remark. Russia’s readiness to deploy new most advanced strategic systems announced by Vladimir Putin means not only “preemptive deterrence” to curb the arms race but also serves as a reminder to our partners that the 500-year-long dominance of Europe and the West in the world has inevitably came to an end. In an attempt to reverse history, the United States, and to some extent Europeans, are basically unleashing a new Cold War in order to regain the positions they have lost over the last several decades. But the world has changed, and the result will not be the same as before. A preliminary analysis shows that the military, political, economic, moral, and intellectual possibilities of Russia and China … by far exceed those of the revenge-seekers.

So, instead of seeking revenge they will have to get prepared for living in a new highly competitive but much fairer world and building a new global order for it to replace the crumbling old one.

However, while making it clear that it will not allow others to regain military superiority and increasingly becoming the main supplier of security in the world, Russia has not yet proposed a new program to mankind, even though the need for it is quite obvious. Alarm about the threat of war is growing worldwide, but the actual situation is even worse, as more and more systems appear that undermine strategic stability and can provoke a conflict. The ruling elites in many countries are at a loss. Relations between the two nuclear superpowers—Russia and the United States—are worse than ever since the 1950s and the Cuban Missile Crisis.

Naturally, Russia should not repeat cloying Soviet-era peace initiatives but should seize initiative and start fighting for peace not only in deed but also in word by intensifying peoples’ sense of self-preservation and tying the hands of those who want to reverse history. There must be a promising picture of the world where everyone would want to live. Russia and China have proposed a big Eurasian partnership a “One Belt, One Road” and “a community of common destiny.” But it needs to be specified and developed further.

This article was originally published in Russian on March 12 in “Rossiyskaya Gazeta”.

*Russian political scientist Sergei Karaganov is the Dean of the School of World Economy and International Affairs, National Research University―Higher School of Economics, Honorary Chairman of the Presidium of the Council on Foreign and Defense Policy