We re-publish here the last of a series of articles on nuclear reactors which appeared in Asia Times during the months of January and February 2020, signed by Jonathan Tennenbaum, PhD. Hoping that the current persectives might suggest to re-open the dialogue on the usefulness of that source of energy (emphasis in the text are added).

Pebble-bed high-temperature reactors get their name from the fact that the nuclear fuel is packed in tennis-ball sized spheres (“pebbles”), rather than in the conventional fuel rods. Each fuel ball consists of thousands of tiny fuel particles, each encapsulated in multiple layers of temperature-resistent ceramic material, embedded in a sphere of graphite.

Encapsulating the fuel in these ceramic “coated particles” prevents radioactive fission products from escaping even up to very high temperatures. This contributes greatly to the safety of the system. Combined with the other passive safety features, it rules out a large-scale release of radioactive material in all accident scenarios. 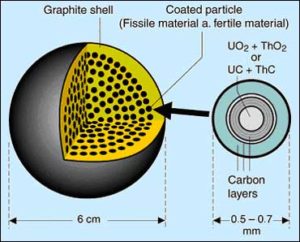 A second big advantage for safety is a very large negative temperature coefficient, meaning that the efficiency of the chain reaction drops off rapidly as the temperature increases. The result is that the fission reactions come to a halt, by physics alone, when the temperature in the reactor exceeds a certain level.

This was impressively demonstrated by experiments with the experimental AVR reactor in Jülich, Germany, and later in the Chinese test reactor HTR-10 in China. The control rods were withdrawn and active cooling systems turned off. Nothing happened. The temperature rose to a pre-designed maximum level, the fuel balls remained intact and there was no significant release of radioactivity.

A third major advantage of the pebble-bed reactor is that it can be continuously fueled. Conventional reactors must be refueled every 1-2 years. The plant must be shut down, the reactor core vessel opened, the spent fuel rods removed and stored, and replaced by new fuel roads. Due to the high radiation levels these operations must be done by remote control. The refueling operation typically takes from 3-5 weeks, during which the plant produces no electricity. These refueling “outages” naturally add to the costs of nuclear power generation.

In the pebble bed reactor, by contrast, there is a continuous fueling process: fuel balls leave the pile at the funnel-shaped bottom of the reactor, while new ones (or recycled old ones) are added to the pile at the top. Power generation continues without interruption.

Finally, the reactor is designed to operate at high temperatures, with a correspondingly higher efficiency of electricity generation and potential to generate process heat for industrial use. It uses helium – an inert gas – as a coolant, preventing unwanted chemical reactions and further enhancing the system’s safety.

The pebble bed reactor was developed by Professor Rudolf Schulten in Germany, where a small test reactor, the above-mentioned AVR, operated for over 20 years. Later a full-scale power reactor was built, the 300 megawatt THTR, which was designed to be able to operate with a combination uranium-thorium fuel. The THTR project suffered from a series of technical problems and from massive political attacks by the anti-nuclear movement. The reactor operated for only three years and was shut down in 1989.

Subsequently the HTR design found refuge in China. A 10 MW prototype has operated since 2003 at Qinghua University. Last year the construction of a 210 MWe demonstration HTR power plant was completed in Shandong province. Known as the HTR-PM, it is made up of two reactor modules. It is the first commercial power plant of its kind in the world.

Another thrust of innovation is to reduce the cost and increase the flexibility of nuclear energy by developing compact, standardized reactor modules that can be factory-produced and transported to the plant site. The power plant would typically combine 2 or more units to reach the desired output. More could be added over time. “Mass production” of reactor modules in centralized facilities would be much cheaper than construction at a site, and standardized designs would streamline the licensing process. Also, the starting capital would be a fraction of what is required for a large plant, making this form of nuclear energy much more accessible.

Experience with small nuclear reactors goes back to the development of reactors for nuclear submarines and later aircraft carriers. About 700 such reactors have been used to power sea vessels since the 1950s, many of them standardized in design and construction. All but a few were built for military vessels, but Russia from the Soviet period up to today has used compact reactors quite successfully to power its Arctic ice-breaker ships. Russia also operates the world’s only nuclear-powered container ship, the Sevmorput.

Building on this experience, Russia’s state nuclear company Rosatom developed a floating nuclear plant, which can be transported by water to coastal locations, supplying electricity to local communities and regions. At the end of last year, Russia began operation of its first floating nuclear plant, the Admiral Lomonosov. The plant has two reactors of the standard KLT-40 type, otherwise used for nuclear ice-breakers. Providing about 70 MW of electrical power, the Admiral Lomonosov is now installed at Pevek, Chukotka in the Far East of the country. The plant is intended to be the first of a series, which Rosatom intends to market worldwide.

Recent years have witnessed an increasingly intense rush to bring competitive SMRs onto the market. The race is between both established nuclear supplier companies and a variety of newer ones. The SMR players include Westinghouse, GE-Hitachi, NuScale, Advanced Reactor Concepts, L.L.C., and Chinergy. Whoever wants to win has to get their first SMR actually built somewhere. In this context China has an obvious advantage insofar as prototype SMR’s have already been built there (see below), the effort has policy support, and the power of the central government makes it much easier to realize nuclear projects in general. That makes China also attractive as a location for projects that Western companies want to get built – naturally with technology-sharing as a condition.

One strategy, exemplified by the prominent US SMR company NuScale and its competitor GE-Hitachi, is to develop a smaller and greatly simplified version of a tried-and-proven reactor type – in this case, a LWR subtype called the pressurized water reactor. Both companies claim (among other things) a high degree of built-in, passive safety and drastically reduced capital costs per MW of electric power. NuScale appears to have landed a concrete project: the construction of a 12-module reference plant at a site in the Idaho National Laboratory. The first module is planned to go online in 2026. 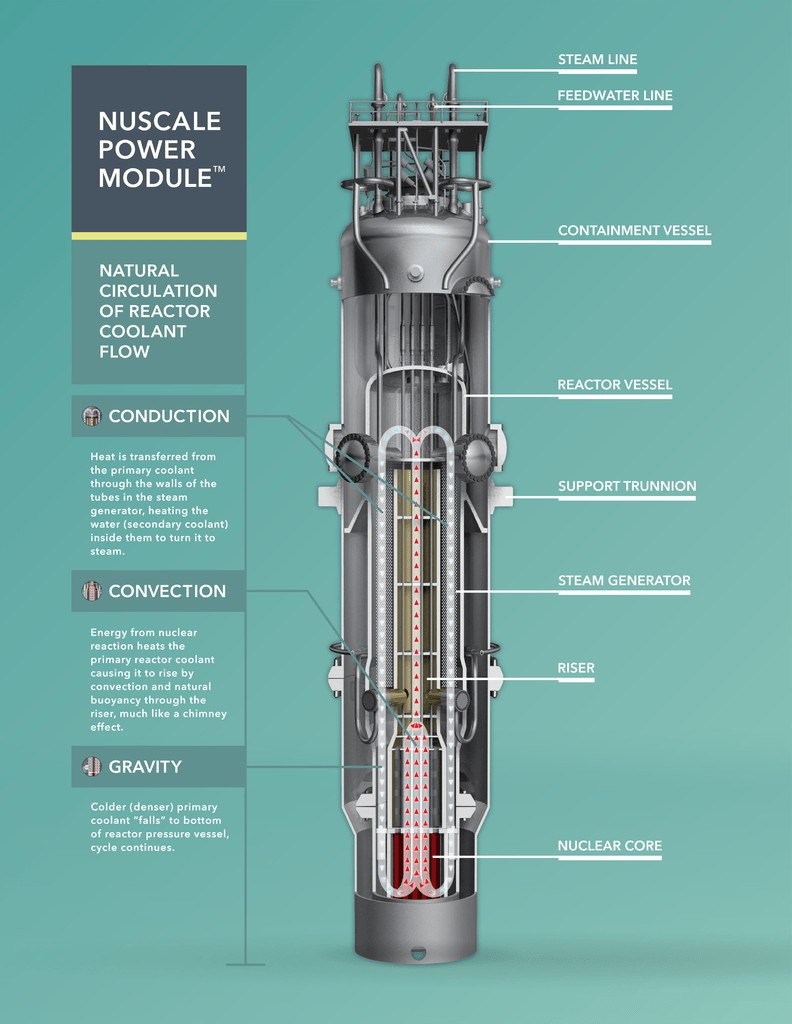 Meanwhile, last year the China National Nuclear Corporation announced the launching of a demonstration project for a “small multipurpose modular reactor”, based on pressurized water reactor technology. Th demonstrator reactor, named Linglong One, is supposed to go on line in Changjiang in Hainan 2025. Indonesia and South Korea are also working on small modular reactors of a similar type.

The SMR landscape is evolving rapidly.

Suffice it to say that, although there has been substantial progress, no 100% satisfactory solution has been found for the problems of nuclear fission power. Since the world cannot do without nuclear energy, we must accept some risks and compromises until something better comes along.

Evidence for the existence of so-called Low Energy Nuclear Reactions (LENR) points to the possibility of an essentially radioactivity-free generation of energy by nuclear processes. This has enormous promise. On the one hand there are plenty of relatively simple experiments giving net excess heat, and especially the Japanese experiments have demonstrated good reproducibility. But there are lots of unknowns, including how to regulate and control LENR processes for practical applications. A confirmed physical explanation is still lacking. Optimistically one could imagine a relatively near-term application as a low- or medium-temperature heat source. Evidence of transmutation, found in many LENR experiments, also suggests a potential way to eliminate radioactive waste; research in this direction has already been pursued in Japan,

“Hot fusion” – nuclear fusion reactions at temperatures of millions of degrees – is a completely different ball game: Here the basic physics is well understood, but the technical difficulties along the way to economically viable hot fusion power sources remain formidable. On the other hand, hot fusion holds the potential to attain orders-of-magnitude-higher power densities than fission reactors or any other known energy technology. The future could be bright.

Finally, I think one should not put too much trust in the predictions of the present mathematical climate models. We have to consider the possibility that climate change will continue even if (or after) human-caused CO2 emissions are reduced to zero. That’s all the more reason to avoid hysterical policies – such as excessive investment into so-called renewable sources – that would weaken the real economy and undermine the ability of nations to deal with future environmental conditions, whatever they might turn out to be.