We republish in part an article appeared in  The Conversation May 9, 2017 under the headline “To get the ‘good debt’ tick, infrastructure needs to be fit for the future”. By Cynthia Mitchell, David Singleton and Jim Bentley* In distinguishing between “good” and “bad” debt, (Australian) federal Treasurer Scott Morrison equates good debt with infrastructure investment. However, not all infrastructure investment announced in the budget is necessarily “good”. We are now in the Anthropocene – a new geological age defined by the global scale of humanity’s impact on the Earth – which places new requirements on our infrastructures. We need to move beyond the AAA ratings mindset, and instead aim for net-positive outcomes in social, economic and ecological terms from the outset. Infrastructure (such as transport, water, energy, communications) underpins our ability to live in cities and our quality of life. And most infrastructure is very, very long-lived. Therefore, our infrastructure investment decisions matter enormously, especially for tomorrow. More than half of the world’s people live in cities, and have just one planet’s worth of material resources to share around. This means we must define a new set of expectations and performance criteria for infrastructure. Rather than settling for doing less bad, such as less environmental destruction or social disruption, we must aim from the outset to do more good. This net-positive approach requires us to restore, regenerate and increase social, cultural, natural and economic capital.

What sort of change is needed? 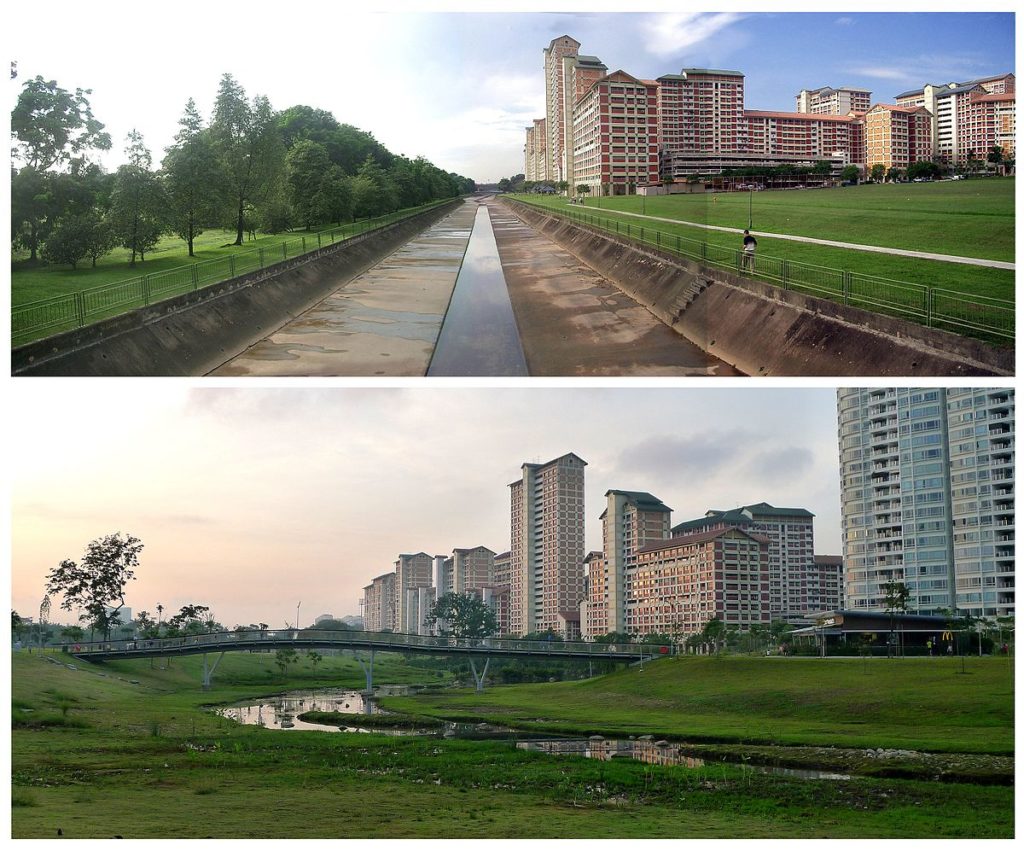 Bishan Park before and after its renaturalization. Bishan Park is one of Singapore’s most popular parks in the heartlands of Singapore. As part of a much-needed park upgrade and plans to improve the capacity of the Kallang River along the edge of the park, works were carried out simultaneously to transform the utilitarian concrete channel into a naturalised river, creating a new urban river park[/caption] Net-positive thinking aligns with a groundbreaking speech by Geoff Summerhayes, executive board member of Australia’s Prudential Regulation Authority (APRA), earlier this year. He identified climate change risk as a core fiduciary concern, and therefore central to directors’ duties. This shift raises significant questions for the financial and operational validity of major infrastructure projects. For example, in assessing the WestConnex motorway project, Infrastructure Australia queried why a broader set of (potentially less energy-intensive) transport options was not considered. Similar questions arise for the Northern Australia Infrastructure Fund’s support for Adani’s giant Carmichael coal mine and associated water and transport infrastructure. A core part of the switch to net-positive infrastructure is the realisation that resilience and robustness are different things. Historically, robustness has been central to infrastructure planning. However, robustness relies on assuming that the future is more or less predictable. In the Anthropocene, that assumption no longer holds.

How do we build in resilience?

So, the best we can do is set ourselves up for a resilient future. This is one where our infrastructure is at its core flexible and adaptable. This could include, for example, phasing infrastructure investment and development over time. Current analysis is biased toward building big projects because we assume our projected demand is correct. Therefore, we expect to reduce the overall cost by building the big project now. However, in a more uncertain future, investing incrementally reduces risk and builds resilience, while spreading the cost and impact over time. This approach allows us to monitor and amend our planning as appropriate. It has been shown to save water utilities in Melbourne as much as A$2 billion. Maybe the fact that we can be criticised for not having enough capacity ready in time has influenced our decision-making. We should really be challenged over investing too much, too soon, thereby eliminating the opportunity to adapt our thinking. Or maybe we are so concerned about the need to build certainty into our planning that we are missing the opportunity to build learning through feedback loops into our strategies. Surely there is a balance to be struck between providing enough certainty for investment without pretending we know with absolute certainty what we need to invest for the next 30 years. We need long-term plans alongside learning and adaptation to respond to the imminent challenges facing infrastructure everywhere. These include: Regulatory reform is part of what’s required to enable public and private investment in better outcomes. Here too we need to learn our way forward. Sydney’s emerging, world-leading market in recycled water is an example of a successful niche development that delivers more liveable and productive pockets in our cities through innovative integrated infrastructure. Ultimately, doing infrastructure differently will also require investment in research on infrastructure. The UK is investing £280 million in this through the Collaboratium for Research on Infrastructure and Cities. But in Australia’s recent draft roadmap for major research investment, infrastructure is largely absent. We overlook infrastructure research at our peril. *Signed by  Cynthia Mitchell (Chair of Sydney’s Local Water Solutions Forum, and a Member of the NSW Government’s Independent Water Advisory Panel. She consults widely to the water sector), David Singleton (Chair of the Infrastructure Sustainability Council of Australia and a Swinburne University Council member) and Jim Bentley (Managing Director of Hunter Water Corporation), the full article is readable at this link: http://theconversation.com/to-get-the-good-debt-tick-infrastructure-needs-to-be-fit-for-the-future-77159?utm_medium=email&utm_campaign=The%20Weekend%20Conversation%20-%2073655642&utm_content=The%20Weekend%20Conversation%20-%2073655642+CID_eb726dcf89f14523e27cae6231749b05&utm_source=campaign_monitor&utm_term=To%20get%20the%20good%20debt%20tick%20infrastructure%20needs%20to%20be%20fit%20for%20the%20future [amazonjs asin=”B01GIXF6H4″ locale=”IT” title=”Lo Stato Nazione: Evoluzione e Globalizzazioni”]]]>
_________________________________________________________________________