It’s a tragedy of Shakespearean proportions: A vulnerable young woman seeks the love and approval of her powerful family’s cruel pater familias and his adored, yet psychologically crippled son, after her own father dies at their hands. 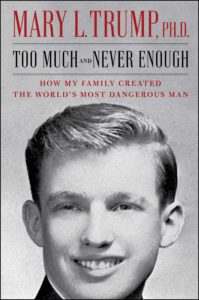 30 July 2020 – Of the many authors who’ve written about Donald Trump none has had the insight, the immediate and long-term proximity to her subject as has Mary L. Trump (Too Much and Never Enough: How My Family Created the World’s Most Dangerous Man, Simon & Schuster, 2020, 225 pages). In addition to her direct knowledge of the family over many years, Mary holds a PhD in Advanced Psychological Studies and has taught graduate courses in trauma, psychopathology and developmental psychology. In other words, she knows whereof she speaks.

Some readers will insist that Mary wrote this book to wreak revenge on the family for cutting her out of the will along with her brother Fred III, and their children and driving them out of the Family, after first destroying their father, Fred Jr, aka “Freddy.” The wealth that Fred Sr accumulated through his real estate investments and related shady deals was reportedly enormous; according to Mary, at one point it approached $1 billion. Much of that, however, was squandered by Donald in his various financial/real estate wingdings, such as the colossal failures of his Atlantic City hotel casinos. Fred Sr was able to give his children – Maryanne, Fred Jr, Elizabeth, Donald, and Robert – great wealth, the finest education, and when he cared to, a boost up in their various careers.

For example, as recounted in Too Much and Never Enough, when Maryanne, the eldest, then a US Attorney, wanted to secure a judgeship on the US district court in New Jersey, Fred contacted his good friend, the Mob lawyer Roy Cohn (who also became a mentor to Donald when the budding tycoon moved into the Manhattan real estate jungle). Cohn – who had served as the chief counsel to Sen. Joe McCarthy during the notorious witch hunt against Americans suspected of Communist sympathies – reached out to his friend Ed Meese, then the Attorney General under President Reagan. Maryanne soon took her seat on the court. In 1985, she recused herself in a drug-trafficking case due to her brother Donald’s relationship with the alleged trafficker.

But the importance of the Mary Trump’s story cannot be erased or ignored on the grounds that she might have had ulterior motives. She is quite clear about her intention in writing the book at this time: She is uniquely qualified to examine and analyze her Uncle Donald, and to explain to the public why he is “the world’s most dangerous man,” and why he must not be allowed to win a second term as President. Donald’s pathological inability to feel or express compassion, his well-known cruelty to those he considers to be “weak” or “losers,” have been amply documented. Millions of Americans have seen for themselves, and in many cases have themselves been victims of those pathologies; nevertheless, to read Mary’s account of how he got to be the way he is, is to see those derangements with renewed clarity.

The deepest wound inflicted on Mary by the Family is the treatment of her father. Fred Sr, aided by Donald, crushed the spirit and ambitions of her father, Freddy, who succumbed to alcoholism at age 42, when Mary was 16. Although Freddy was expected, as the firstborn son, to take over the family real estate empire, he was unsuited by personality and inclination for it, although he tried mightily to live up to his father’s demands. No matter how hard he tried, he could never measure up. Despite Fred Sr’s contempt for him, Freddy pursued his love for flying, and became a pilot for TWA. Fred Sr saw this as a betrayal of the Family: Freddy would never get rich that way.

And so, Donald, the next in line, became the Father’s Frankenstein monster.

The family’s treatment of Fred Jr was nothing short of barbaric (think of Michael Corleone and his brother Fredo), and this cold cruelty culminated later, after Freddy’s death, in the three other siblings’ denial of health insurance to Freddy’s grandson and Mary’s nephew William, who was born with cerebral palsy and needed lifetime costly medical care.

As Mary explained in a recent interview, when asked if her book is her way of getting retribution for loss of the wealth she was owed, she replied: “Given this family, it would be utterly naive to say it has nothing to do with money. But for both me and my brother, it has much more to do with that our father be recognized,” she said. “He existed, he lived, he was their oldest son. And William is my father’s grandson. He is as much a part of that family as anybody else. He desperately needs extra care.”

The rest of us could have been spared learning about this tawdry history had not the favorite son been elected President of the United States. Now we see the many ways that the inner dynamics of this deeply dysfunctional family have played out on the larger stage of political history. And it is not only the book which has succeeded in pulling back the curtain. Three years ago, Mary leaked previously secret Family financial documents – initially anonymously – to the New York Times. She had declined to assist the Times in their efforts to nail down details of Trump’s financial misdeeds but, as she reveals in the book, she was ultimately persuaded once her uncle was sworn in as President. After that, facing the possibility that Trump could win a second term she decided to tell what she, better than anyone else, knew to be the truth about him. And, it is quite possible that Mary’s role in bringing down her uncle, will turn out to be the coup de grâce in Donald’s fall.

Leaving aside his illiteracy (Mary suggests that he probably has an undiagnosed learning disorder) and vulgar language; his retrograde behavior toward women and minorities; his frequent instigation to violence at rallies against his political opponents; his humiliation and denigration of those he perceives as weak; and much more, there are two areas in which Trump has caused lasting damage to the US and its international partnerships.

Trump’s “tear it all down” version of foreign policy has been amply documented: his trashing of the Iran nuclear deal and his withdrawal from the World Health Organization in the middle of a deadly global pandemic stand out as particularly egregious. His promising overtures to Russian President Putin and Chinese President Xi, early in his term, have since hardened into near-Cold War tensions; his offer to buy Greenland, the autonomous territory of the Kingdom of Denmark which he referred to as “a large real estate deal”, was met with derisive laughter.

But perhaps it is his utter failure to come to terms with the three-fold calamity that has overtaken the United States in 2020, that will be his denouement. The combination of the covid-19 pandemic, which has now claimed over 150,000 lives – about a quarter of all deaths worldwide – and the concurrent blowout of the US economy – it was reported July 30 that the economy fell by 9.5% in the second quarter of 2020, an annualized rate of 33% – a previously unheard of meltdown; and the reckoning now taking place in race relations following the murder of George Floyd.

Can Trump overcome what increasingly looks like a crushing defeat on November 3? He will certainly attempt every underhanded means to do so – the kind of thing he learned so well from his father and, later, from his godfather Roy Cohn. Trump announced that he is considering postponing the election due to his false assertion that mail-in voting, which is likely to predominate this year due to the pandemic, cannot be trusted.

If Trump goes down, it will be thanks to all of the above, but perhaps it will be his niece Mary who will most enjoy the spectacle.

Too Much and Never Enough: How My Family Created the World’s Most Dangerous Man