By Muriel Mirak-Weissbach Students at the Anahit Tsitsikyan Music School in Yerevan celebrated the donation of new instruments in the most appropriate fashion possible: by playing them in concert for a capacity audience of friends and family. On April 25, guests gathered in the recital hall, which had been fully renovated in 2014, by the US Embassy’s organization Helping Hands and the Fuller Center for Housing Armenia. [caption id="attachment_6808" align="alignnone" width="300"] 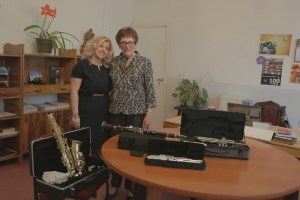 Principal Diana Hovhannisyan and Muriel Mirak-Weissbach with the new wind instruments[/caption] After a brief welcoming, all stood for a moment of silence in memory of the victims of the Armenian Genocide. Over the previous days, Yerevan had hosted international events commemorating the 101st anniversary, including the Aurora Prize weekend. In her introduction, the musicology teacher stressed that, as we remember the past, we commit ourselves to securing the future, and schools like this one are crucial to that effort. The concert opened with a piano solo, performed by a young girl who had found a new home with her family in Yerevan, after fleeing war-ravaged Syria last year. Then, with piano accompaniment, students performed alone or in groups. Instrumentalists played works for the clarinet, violin or canon – both solo and ensemble — and vocalists included a female chorus of four as well as a full mixed chorus of students of all ages, the youngest five years old. The clarinet and solo canon were among the new instruments the school had received as the result of a crowd-fundraising effort launched by Ayo! and supported, among others, by the Mirak-Weissbach Foundation (www.m-w-stiftung.org). Ayo! (www.weareayo.org) was founded two years ago by the Fund for Armenian Relief (www.farusa.org), and sponsors development projects to assist children, elderly and socially disadvantaged people in Armenia. [caption id="attachment_6809" align="alignnone" width="300"] 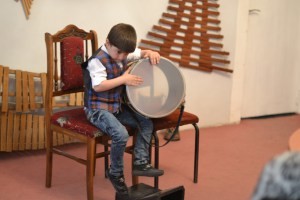 Volodya Sargsyan and his drum[/caption] As the school’s principal, Diana Hovhannisyan, had told me before the performance, we were not able to hear all the new instruments for one simple reason: since the school previously lacked wind instruments, it could not offer instruction for the clarinet, trumpet, flute or saxophone. Now, it has all these instruments, two of each, and will recruit teachers to organize classes for the numerous students who have expressed a desire to learn them. One young man had studied privately with his own clarinet, and it was he who inaugurated the new instrument during the concert. In addition to these wind instruments, the school received a new canon, which made its debut as well. During our next visit, Hovhannisyan promised, we would hear a wind ensemble perform. The program offered at the concert presented a mix of traditional Armenian music and the classical European repertoire. Youngsters who study traditional Armenian music enjoy the support of the government, which covers tuition, whereas others must foot the bill themselves. This amounts to $12 – $15 a month, a considerable amount for the families in the low-income neighborhood where the students live. And, if the school does not have instruments available, the families have to purchase them. The more progress a student makes, the more important that quality instruments, like those donated, be available, no matter what the price. As Jemma Safaryan, the Ayo! Project Manager, remarked, “The instruments they received as a gift through our project made the children more excited and happy. They strive to work even harder, as now they have the one important thing that was lacking — the instruments!” The enthusiasm and joy the students expressed was indeed rewarding. And to see the 5-year-old Volodya Sargsyan among them was a special treat. Not only does he sing in the full mixed chorus, he is also a gifted solo drummer, as we were privileged to witness in a short session he played for us after the concert. Surely, Anahit Tsitsikyan would be proud. http://www.mirak-weissbach.de/ (article from the Armenian Mirror Spectator: http://www.mirrorspectator.com/2016/05/05/sharing-the-gift-of-music/)]]>